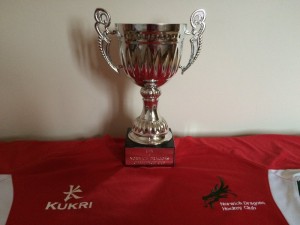 In the 7th year of this fantastic end of season tournament between UEA Hockey Club and Norwich Dragons Hockey Club, Dragons managed to squeeze through on sudden death penalty flicks to give an overall tally of UEAHC 4 tournament wins to NDHC’s 3.

This season’s event was played in the best spirit ever, showing the great friendship between the City Centre Clubs, as well as the personal friendships between players.

Dragons were concerned that the emerging trend of winners might continue, with UEA the bookies’ favourites to grab the trophy back, particularly when UEA Ladies ‘upper’ team took the lead in one of the first games, however Captain Kingy inspired the troops to recover the situation.  A great drag-flick from Tabba to get the sides level, a fantastic solo goal from the skipper Rach and then young Aoife stepped up to score what turned out to be the winner.  She had to leave the pitch before the end to throw the javelin in the Norfolk Schools Athletics Championships and win her event, meaning she represents Norfolk at the East Championships!  Credit to UEA though, they never gave up and scored a goal with two minutes left on the clock, to give a final score of 3-2 to Dragons.

On the other pitch, the Men’s ‘lower’ teams were battling out a 2-1 win to Dragons, giving the underdogs a two point advantage, however, the students were enjoying the sunshine and upped the stakes by securing a late equaliser in the second Ladies’ match (2-2) and victorious over the Men’s ‘upper’ Dragons team 4-0!!

So after 4 matches the tournament score was 2.5 to Dragons and 1.5 to UEA, meaning the Mixed game would play a major part in the destination of the trophy.

UEA played far better than Dragons, making full use of the team and came away with the 4-1 win, which tied the overall event at 2.5 points each.

As per the tournament rules, penalty flicks had to decide the eventual winner.

With the 5 flick takers decided on each side, up stepped Hannah to take the first for Dragons, the deadly sin of a late change of mind meant she flicked the ball at the keepers hand for an easy save.  However having scored two great goals during the Mixed game Jo didn’t manage to convert her flick for UEA, Robbie making a strong save.

So 4-4 in flicks meant sudden death.  Under the excellent umpiring control of Mason Wright supported by Henry Eades, the order was changed for the flicks with UEA stepping up first and Robbie made another great save.

Hardy redeemed herself by slotting her flick away to seal the win for Dragons!!

Excellent umpiring by all, special mention to Henry for his three games and to Gary and Hazel for their help on the day.  Thanks to all our supporters and to the Teas Ladies Amelia and Persy!

Photos of the penalty flicks here.