This was a disappointing result for Dragons who seem to be going through a difficult patch at the moment. Following the recent defeat to Watton 2, Dragons really needed a good win to keep them in the promotion race.

Dragons took the initiative by scoring first. When Dragons play well they are able to move the ball around. Dragons had been under a lot of pressure from the start , after defending 5 short corners in the opening 5 minutes. The ball was eventually cleared and moved swiftly up the pitch from Gemma Rump, to Sophie Farrow, Megan Williams and eventually to Claire Canning who swept the ball towards Kate McKenna to slot the ball away on the far post.

Kate had a good game, and was unlucky on a number of occasions not to add to her goal tally.

Christine Musowe and Sophie Farrow also had a good game in the defensive line.

The majority of the game Dragons lost their composure, passing the ball into dead spaces and letting Magpies dictate the play by not posting up .

The forwards had a disappointing time. They were no match for the Magpies who defended well.

Laura Tuck saved even more embarrassment for the home side, when a Magpies player slipped through the defence and was one on one with the keeper, however Laura kept her cool and made the save. 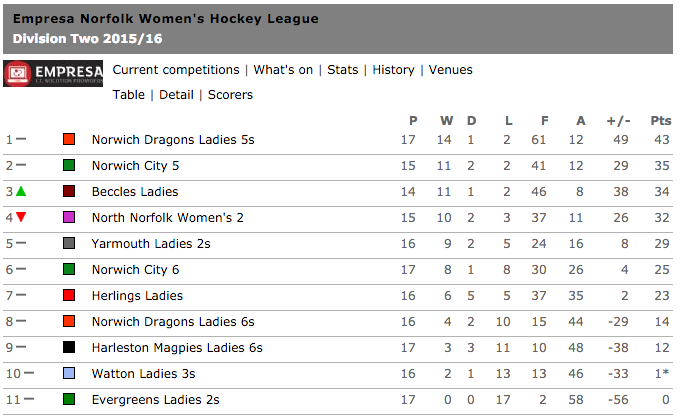 This is the match the 5’s were all eager to play, Beccles are the contenders for the top table position. They had a similar set of results to the 5’s but were behind on games due to pitch issues meaning the two teams hadn’t met yet this season. Chiara started us off with match statistics, basically she told us we had to win 3 out of the next 4 games to maintain a high league position, no pressure!

We arrived early to practise and get warmed up, the team were ready and for this game also welcomed a debutant for the club, Clare Moylan into midfield. Beccles had first push back and the first 10 minutes were quite evenly matched, the playing styles quite different, the 5’s having more of a passing game and Beccles going for long strikes through the pitch. At bottom of the diamond Vicky Earley was on hand to intercept and hussle the Beccles players and move the ball up the pitch and out wide to waiting wingers Mel Widdows and Clare. The ball was passed around the opposition picked up by Lisa Harwood and pushed forward to Zara Howes running forward out on the wing. Beccles quickly pushed into defensive mode and thwarted our first efforts. The 5’s were keen to stay in the opposition D, ball fed back in by Rachel Bruce across the D and pushed in on the post by Zara. Cheers by all in white!

Beccles were now keen to match the score and it was end to end. Beccles trying to break through the centre of the pitch. In the D, Jemima Williams was controlling the centre, with Jess Tye-Leech and Helen Marsh supporting either side. Beccles were resilient and managed to gain a short corner, using their powerful strikes, they managed to slip the ball at lightning speed onto the back board.

The 5’s maintained their effort and pushed forward, Chiara Bond with go-go gadget arm reach was supporting the forwards firing the ball up into the D. The second goal came from a scramble in the D, Zara passing ball in, keeper deflection, opposition defence trying to clear the ball, Chiara finally getting that final push to edge it over the line.

At half time the score was 2-1. With the 5’s, 13 pairs of legs and Beccles with their 11 players, the pace and focus needed to be maintained, Chiara’s words echoing in our minds.

In the second half we and Amy Forse in goal had a nervous moment when a long strike passed all players, looking like it was heading off the pitch, it pinged off the post and back into the D. Amy charged, so did Beccles, the ball was cleared we all breathed out! Laura Hansell and Rachael Matthews swapped in to pick up play in midfield and ran the ball through and down the wings.

The battle was continuing and the defence were continuing to hold strong, charging on shorts, intercepting and feeding the ball out wide. Beccles managed to squeeze another ball into goal. 2-2. The final and winning goal of the game came from another pick up from Zara, who by now was attacking at will down the right and having beaten several players to get into the D, she unleashed a lovely reverse strike into goal behind the keeper.

The last 10 minutes of the game was like being in slow motion, the score had to be maintained till the end! And it was. 100% effort given by whole team, impressive performance against a good opposition.

Zara was deservedly voted player of the match for her great game.

Photos from the game here.