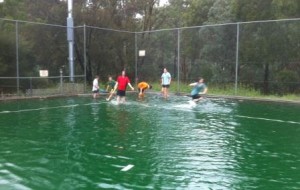 On a very wet, grey Sunday in East Anglia the older Young Dragons had the better plan by playing indoors at Town Close School, whilst the under 14 girls had to travel to St Neots to get wet outside!!

The Under 14 Girls 7-a-side team went to Cambridgeshire to play the next round of matches in the England Hockey Girls Under 14 Development league.  Having beaten Colchester 17-0 and Cambridge City 5-2 in the first round, they went off this morning with lots of confidence.

Hosts St Neots proved the tougher opposition and the girls fought hard for a 4-3 win with goals from spread around the attacking players of Anna Brook, Heather Tasker, Lara Taylor and Lucy Morton.  Next up were Colchester and having beaten them convincingly in October, the girls were hoping for a similar result, however what the coaches and travelling supporters hadn’t expected was exactly the same score, the girls winning 17-0 again, what are the odds on that??

Well done to the sideline for keeping a note of the scorers, being Lucy Morton with 5, Issy Wolfe 3, Heather Tasker 3, Anna Brook 2, Lara Taylor 2, Catherine Matthews and Carmel Windsor-Waite.

Next round on 15th Feb hosted by Cambridge City.  When updated, the table will show Norwich Dragons sitting at the top of the table here.  Just in case you are worried, the photo above is not from today, just the Editor’s bit of fun!!

The Norfolk Indoor Championships for the under 18 Girls and under 16 Boys took place in the Town Close School sports hall today under the watchful eyes of Ali Smyth and Pete Thomas.

The Girls under 18s team had there first outing in the event and with just one training session under their belts were delighted to get a 3-1 win in their first game against Dereham, goals from Lucy Hopgood, Olivia Thomas and Maddie Denman.  However, they knew that the indoor experience of Magpies was likely to prove a tougher challenge, and so it was to be.  The girls had taken great confidence from their start to the tournament and caused Harleston plenty of problems but couldn’t quite find the crucial touch for a goal.

Magpies beat Dereham 7-2 in the final game to take the Norfolk title and move on to the Regional round.

The U16 Boys ran out winners, following a nail-biting 11-8 victory over Norwich City, after both sides had beaten Harleston, 5-2 (Dragons) and 9-4 (City). Dragons scorers were: Jonty Gosling, Ben Watson and Henry Laming x3 against Magpies, and Ben x3, Henry x2, Jonty x3, Tom Harris, Alex Bilalis-Stone and one unclaimed versus City.  The boys were indebted to Ben Nkrumah who stepped up to play in goal at the last minute and pulled off a crucial save from a top-corner destined drag-flick against City for what would have been an equalising goal.

The Boys move on to the Regional tournament on 13th December at UEA.