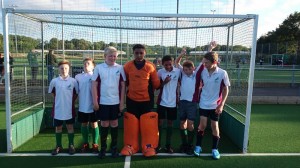 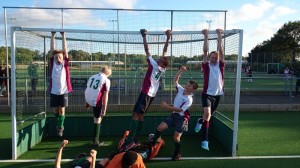 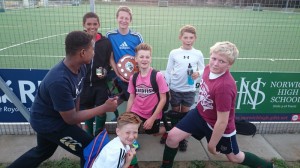 17th June saw the annual 7 a side Development League tournament held at Taverham, run by Broadland HC. There were three matches.

1: They only had seven players (2 late drop outs)

2: They saw the Norwich City teams and concluded that they would get thrashed (see below…)

3: They saw that Norwich City had adults playing for them (although this was because they did not have enough boys and actually, the adult they did face, played just right in the end)

But, they had nothing to fear…

In this game, they played against a team with an adult. To his credit, the adult played in an appropriate way and did not dominate. A tentative start saw the boys go one nil down, with the city attacker finding himself with Ben to beat; he finished with an expert lob leaving Ben in goal no chance. This seemed to spark the boys on and they continued their passing game, often finding themselves in the D and testing the City keeper repeatedly. The three goals were scored by: Pedro Goss (2) and Charlie Nunn.

A great performance, showing real character to come back from 1-0 down against the team the boys thought they would be thrashed by.

A slight error saw the game start without an umpire! We wondered why the three reasons for Dragons getting a short corner in the first minute were ignored! The game was restarted and Dragons piled on the pressure throughout, keeping the ball and creating many goal scoring chances. The goal was well worked with unselfish play from Charlie and Pedro – a pass across the face of the goal saw Robo CB arriving at the far post to finish in style. But City did not give up and although they only had a few chances, were able to score. Dragons had opportunities to win; three shots just eluded the player on the far post and ended up going wide. A game which Dragons dominated and other than getting the ball in the net, could not have done anymore! Special mention to Mark who played on, hobbling, following being hit by a hockey ball.

Dragons knew that a win would seal a tournament victory; a draw would rely on goal difference maybe; a loss would mean finishing lower down in the results.

The boys started brilliantly with a goal coming very early on. But, to add some drama to the game, the boys thought they would concede a goal! A great smother by Ben in goal saved the initial shot, but despite Mark’s valiant dive to keep the ball out, the follow up shot rolled over the line. But Dragons then showed real determination and team work to score two more goals to win the game convincingly and also to win the tournament convincingly.

The goals were all scored by Pedro who was the top goal scorer in the tournament with 5 goals and received a trophy and a bag of Skittles.

Nat’s player of the tournament goes to Edward Murphy who worked hard in his attacking defender role, just in front of the back two, making some great tackles and interceptions. His drives at goal led to many chances and many of the team’s goals. He showed great composure, making the right pass on many occasions. 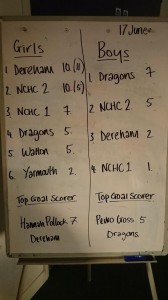