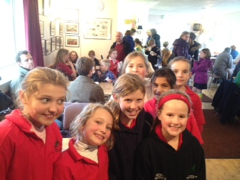 Under ten girls fifth out of seven
Under twelve girls third out of eight.

Thanks to the following managers…

Dragons made an impressive start to the tournament with a 1-0 win (Scarlett Udy) over Magpies B.  It was a superb team performance with some fantastic passing on display.  The mid-field of Jemima Watson and Scarlett Udy worked together well making it difficult for the opposition to make any ground in the Dragons half.

In their second match, Dragons consolidated on their early win with a solid 0-0 draw against Norwich City B.  The defence made up of Sofia Grove, Sasha Hohnen and Simran Rai made some important tackles to keep the game even.

The girls went on to show grit and determination in their next match to come back from 1-0 down against Dereham.  After some persistant tackles in the mid-field by Annabelle Hodgson and Octavia Udy, Scarlett Udy scored a break away goal to draw the game level.  Despite further pressure from Dereham Simran Rai helped to secure the draw with a fine performance in goal.

Following a frustrating game against Norwich City A, the mini-Dragons rounded off the tournament with a well earned 0-0 draw against Pelicans. 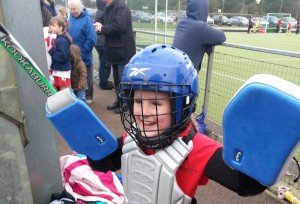 Without a regular goal keeper the girls showed great team spirit by volunteering to take it in turns in goal.  Overall, it was an excellent debut for the team putting them in a good position to develop further in the future. 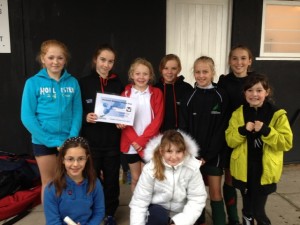 Huge credit must go to all nine players in the U12 side for the tournament held at Harleston, and especially to the new members of the squad – Dani Harvey, Lara Taylor and Jodi Rump – who looked completely at home.

The day started with the sad news that Aimee Lowry was injured, and therefore the squad would be one player down. Despite that, the team went into the first game against Magpies B full of confidence, and playing some fantastic hockey. The game was sealed when Lucy Morton ran half the length of the pitch with the ball, out-pacing the defence and calmly slotting the ball past the advancing goalkeeper. The defence then worked hard to ensure the first three points were suitably claimed.

The second game, against a strong Norwich City B team, saw the team concede an early goal, but rally strongly once they started to believe in themselves and it was no surprise when a combination of Lucy and the skipper Rachel Bruce earned a well-deserved draw.

With seven games to play, there were some concerns that the team might run out of steam – having only one substitute – but the effort was tremendous throughout. There followed a goalless draw against Pelicans, which in all honesty the Dragons girls could easily have won on a different day. They hit the post and had a number of great chances narrowly miss. Ella Mansley was particularly instrumental in controlling the midfield, whilst Lara Taylor was visibly gaining confidence alongside the very impressive Carmel Windsor Waite as the rock of the team’s defence.

A highly anticipated game against Dereham saw possibly the best of the performances, and a 2-0 win was just reward for all the girl’s hard work. Isobel Wolfe ran absolutely tirelessly whilst Lucy Morton continued her impressive exploits in front of goal. This was then followed by two very tough games against Norwich City A and Magpies A, which were lost 2-0 and 3-1. The game against City A was particularly notable for the saves that Alessandra Pellegrini made under heavy pressure.

The final game, against Watton, was much tougher than the team were initially expecting, but they rallied well to secure a 2-0 win via goals from Isobel Wolfe and Lucy Morton.

Overall the team finished a hugely impressive third, and perhaps even more importantly they finished with huge grins on their faces (despite the rain and the sheer exhaustion of the day). A genuine team effort and excellent contributions right across the piece.