Both Masters Teams were in action today at the Den looking for a place in the Quarter Finals of their respective competitions.

Up first for a 12pm pushback were the over 40s Men.

Most had played yesterday, so ageing legs were already a bit weary, however the brave souls took to the pitch not sure what to expect of their opposition.

By 2pm the Ladies over 35s Masters were ready to get their game underway, buoyed by the return to the bench of Donna Vaughan and all keen to match the result of the Men.

Captain James set up an attacking formation with instructions to move to a more defensive line up if required, given that Chelmsford were an unknown entity.

Dragons used their slick passing triangles to put pressure on the visitor’s defence creating several short corners and from one such corner Hardy slotted the ball away.  Space on the right from another short corner gave O’Neill-Simpson the chance to fire in Dragons’ second and before her visit to the naughty bench (for a dodgy tackle) Smith scored the home team’s third.   The introduction of Vaughan reminded everyone of her class, despite only recently having given birth to little Eva. 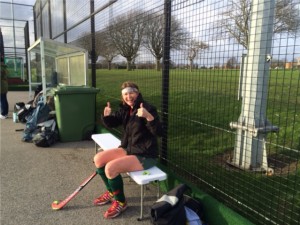 Further goals in the half from Shreeve and James gave a comfortable 5-0 lead at half time, although the later stages of the half became scrappy.  Bond was called into action more often than previous rounds and dealt with everything with her usual dexterity and calmness.

Half time called for more triangles, letting the ball do the work as the team would inevitably tire.

Second goals for both Hardy and Shreeve and a Chelmsford goal from a short corner brought the score up to 7-1 and that was then end of anything noteworthy.  Oh, but then up stepped Windsor-Waite with a run from deep on the right, charging into the D and firing a bullet into the far corner, the celebration lasted longer than most hot dinners!  Final score 8-1 and progress to the Quarter Finals for a home draw against Jersey.

Photos from the match in the Gallery here.

Thanks to all the sideline supporters for both matches and umpires Joel Lawrence and Hazel Medler.