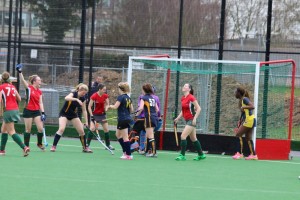 The last game of the season saw some highs and lows for the ladies 4s, some outstanding team play and some lovely passing hockey, which unfortunately resulted in no goals actually being scored.

Dragons dominated play and possession throughout this game and constantly took the ball to the oppositions D with multiple short corners being awarded, but a very quick defence meant that neither Amelia Dawson nor Sue Cross were able to get a ball across the line to open the scoring. Dragon’s took advantage of quick breaks in the midfield from Kate McKenna and Sarah Moore and drove the ball again and again towards the goal, but just couldn’t get the angle right to get past the experienced defensive line.

Gemma Rump and Charlotte Pounder did an amazing job of intercepting Reepham’s hit outs and on more than one occasion changed the play in Dragon’s favour and a goal seemed imminent, but it just wouldn’t come. Reepham opened the scoring with a break in play, followed by a well slipped ball in front of the goal, to the waiting stick of a forward. Their second goal came soon after from a clean strike at the top of the D. Again Dragon’s answered with attacks of their own, Holly Bailey and Mel Widdows both created space down the sides of the pitch and took the ball all the way to the D, with more short corners being awarded, even slipping the ball wide wasn’t enough to beat the defence.

The second half saw some beautiful work from Abi Cowe (PoM) in conjunction with Louise Davis, fantastic communication saw several good switches in play and Dragon’s again seemed the more dominant side. Freya Clogan used some superb 3D skills to beat the Reepham forwards and helped to keep play flowing nicely in Dragon’s favour, but the constant attacks still resulted in no score for Dragon’s. Reephams final goal came about 10 minutes from the end of the game, with yet another break resulting in a virtually empty D and a clean strike on goal, Laura Tuck just missing the save.

Up to the very end Dragons battled for a goal, but Reepham were determined to keep a clean sheet. The last five minutes saw some fairly untidy play from Reepham, with multiple stick tackles taking place. One final short corner was awarded, but was cleared by a Reepham player, who seemed to throw herself bodily onto the floor to clear it!

The score line in no way reflects the quality of Dragon’s play, it was a great team effort and saw some very strong hockey.

As a team we wish Abi Cowe and Katie Buxton all the best as they head to university next season.  I would like to thank everyone who played for the ladies 4s this season and all those parents and friends who have supported us throughout the season – it has been greatly appreciated.

Forwards Lois McGregor, Lisa Harwood,Anja Finnegan, Megan Farrant worked tirelessly up front to move the ball into spaces and create opportunities. Not long into the first half Rachel Mathews scored a great goal assisted by Izzy Wolfe (POM) to put dragons in the lead. This only made the UEA fight harder, Helen Marsh and Rachel made light work of any of UEAs attempts to break through midfield. Chiara Bond made several great interceptions from hits and really disrupted UEAs play many times leading to the switch of play and many opportunities created for dragons. The defence made up of Carmel Windsor-Waite, Jade Blanchflower, Emma Buxton and Alice Smith (GK) tried valiantly to hold back the UEA team but unfortunately on three occasions when a break was made goals were scored. 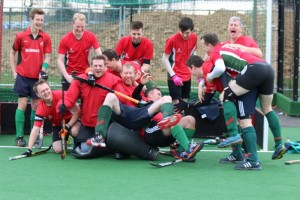 The last game of the season for the Mens 3s saw a rearranged fixture at the Den.  With 3rd place guaranteed, and Bury St Edmunds securing 5th place, this was a game which both sides could enjoy regardless of result.  With this in mind, Dragons made a few tactical changes, and certain players were placed in other areas of the pitch to where they would normally find themselves.

Dragons started strong and there were some good attacks into the Bury area.  Forward Matt JENKINS was on the hunt for goals and was unlucky not to put a couple away in the first 10 minutes.  Fellow forward James GOODSON had his moment to shine up front, after spending all season requesting to play higher up the pitch.  A couple of near misses from J GOODSON worried the Bury defence as Dragons continued to push.

Good defending from Will IVES on the left and Adie KEMP on the right, kept the flanks clear.  Man of the Match Will KIRBY sat in the coveted centre back position, finding himself doing what he does best, keeping the ball out of goals, whether it’s his own, or the oppositions.

Bury did get a goal midway through the first half, in what can only be described as “marking-gate”, but Dragons were not to be deterred.  Solid midfield work from Peter DAVISON kept the ball flowing through the pitch.  Wingers Stu KELLY and Rob GOODSON showed the team that they had had their weetabix that morning, as they rolled back the years and were nearly mistaken for the “youth” of the team.  Attacking midfielders Adam SAYER and John IVES sat in the middle of the pitch and were linking up nicely with the forwards.

Ali SMYTH debuted as a forward and soon set about setting up JENKINS, who slotted home the ball.  Halftime and it was level.  Dragons were very pleased with the new positions and it was decided to keep things as they were for the second half.

The game became drawn out and the ball quickly moved from end-to-end.  Short corners came for Dragons, but they were unlucky not to score.  Keeper Dim IVES kept Dragons in the game, making some good saves, including making the ball disappear under his pads.

Once again Tom HARRIS put in an impressive performance at the back, and Henry LAMING played some lovely balls across the pitch.

Somewhere amongst the second half, Bury scored and Dragons were battling to get an equaliser, the determination not more evident that shown by J GOODSON, who dealt with the advances of a Bury player in a calm, collected manner.

Chances came, but weren’t taken, and the game ended.  A loss for Dragons which won’t impact on the league.  However, during post-match celebrations it was revealed that the Mens 3s may indeed be going to Div 3NE!  Hurrah!

Captains John IVES and Adam SAYER would like to thank the team for all their hard work this season and look forward to more success next year! 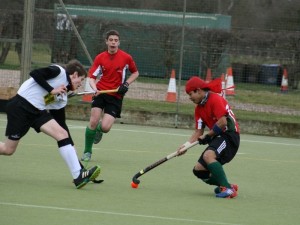 Norwich Dragons 4 travelled to Harleston Magpies 5 where they were crowned league champions after a tense 1-0 win.

Despite their large squad, Dragons were a bit light on defenders.  Andy Hipper, Paul Keating and Dave Pentin were joined by Barney Price and Sam Mann at the back, whilst Jon Price was unavailable due to last week’s shenanigans.  Jon managed the team effectively from the dugout with great use of the rolling subs, whilst Ricky Powley, Andy Cross and Chris Simmons also lent their support.

The first half was a scrappy affair, played mostly in the middle of the park.  Dragons carried the greater attacking threat and created a number of half chances as well as winning several penalty corners.

Magpies found the back of the net, but composed umpiring and honesty from the players saw the goal correctly disallowed.

0-0 at half time saw Dragons inching towards the Championship…

Inspiring team talks from Price, Keating, Moulson and York-Smith saw Dragons breathing fire at the start of the second half, a delighted Sam Mann poking home to give them the lead within a minute of the restart.

With a bit of breathing space Dragons relaxed and the hockey improved.  The midfield dominated, Alex Stone (MoM) showing sublime skill in possession whilst every player’s effort and commitment saw the Magpies tamed.

A final victory in a tight game was a fitting end to the season in which we were proud to be Dragons! 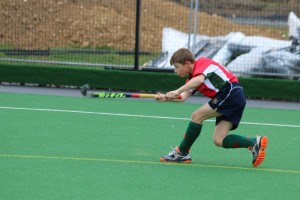