U16 boys began their EH Cup campaign (league system for initial rounds) with a double header against Dereham & Spalding. The boys ran out 8-2 winners over Dereham, hatrick from Henry Laming, two from Jonty Gosling & one apiece for Ben Watson, Robert Chaney Baxter and Tom Williams.

Playing back to back against Spalding was a tougher match, and they took a 1-0 lead, equalised at an overtime corner at the end of the first half from Ben Watson.  The second half saw Dragons really pushing for the win, but the goal just wouldn’t come & ye boys were indebted to a smart late save from Declan Cobb to preserve the draw. 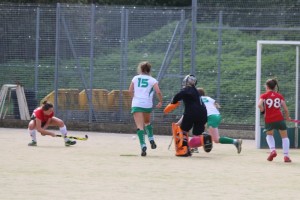 U18 Girls travelled to Long Sutton for the first round match which is a straight knockout, so knew they would need to hit the ground running.  An extremely sandy pitch slowed the girls down and it took some time for them to find their stride, however when it came, the travelling fans were rewarded with some lovely flowing hockey.  By half-time the girls were 5-0 up and cruising.

To the credit of the Long Sutton they started the second half well and were rewarded with two second half girls, both from short corner deflections off Dragons players.  Dragons managed just two more themselves, giving a final score of 7-2 and progress into the next round.

The girls have been drawn away to Spalding in Round 2 on 5th October.