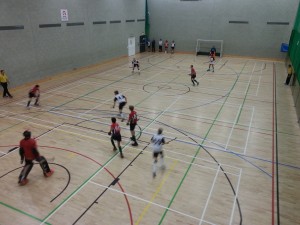 Norwich Dragons Under 16 Boys progressed to the East Regional Championships after winning the Norfolk title ahead of Harleston Magpies and Norwich City.

Harleston Magpies opened the tournament against Norwich City, and after a tight first half, ran out 10-4 winners following a strong second half display.

Dragons opened against Harleston, and, having seen their opposition in action, knew they faced a tough challenge.

The first half saw Dragons start well, with an early goal courtesy of Ben Watson, but Magpies hit straight back. The half continued to see-saw, with Dragons leading 4-3 at the break, thanks to goals from Watson, Rohan Kaushal and a Henry Laming penalty corner.

Harleston started the second half strongly, taking the game to Dragons and levelling the scores, before taking the lead. Dragons hit back courtesy of of Ben Watson to leave the scores at 5-5.

Dragons then had their best spell of the game, with Henry Laming adding two further corners to his first half efforts, and Watson adding his fourth goal. There was still time for Harleston to make it a cagey last couple of minutes for Dragons as they pulled the score back to 8-7 with two quick fire goals.

Dragons pushed back and won another penalty corner, expertly converted by Laming to seal the result with his fourth of the match.

There was little rest for the Dragons squad who then had to face Norwich City in their second game of the day.

With the Dragons squad consisting of just the minimum 5 players, the Boys needed to pace themselves, which handed the early iniative to City, who quickly took the lead.

Dragons hit back courtesy of a Henry Laming penalty corner; however, it was City who continued to set the pace, with Dragons hitting back, before a couple of Dragons corners before half-time put them ahead for the first time for the match at 5-4.

Dragons remained patient and played their way back into the match, with the hard work of Rohan Kaushal upfront hassling the City defence not allowing them to find a rythmn. From this hard work Rohan was able to put Dragons ahead again, and from here Dragons pushed on, winning a succession of corners ably converted by Laming, followed by a final goal from a corner returned to the injector Jonty Gosling for a simple finish.