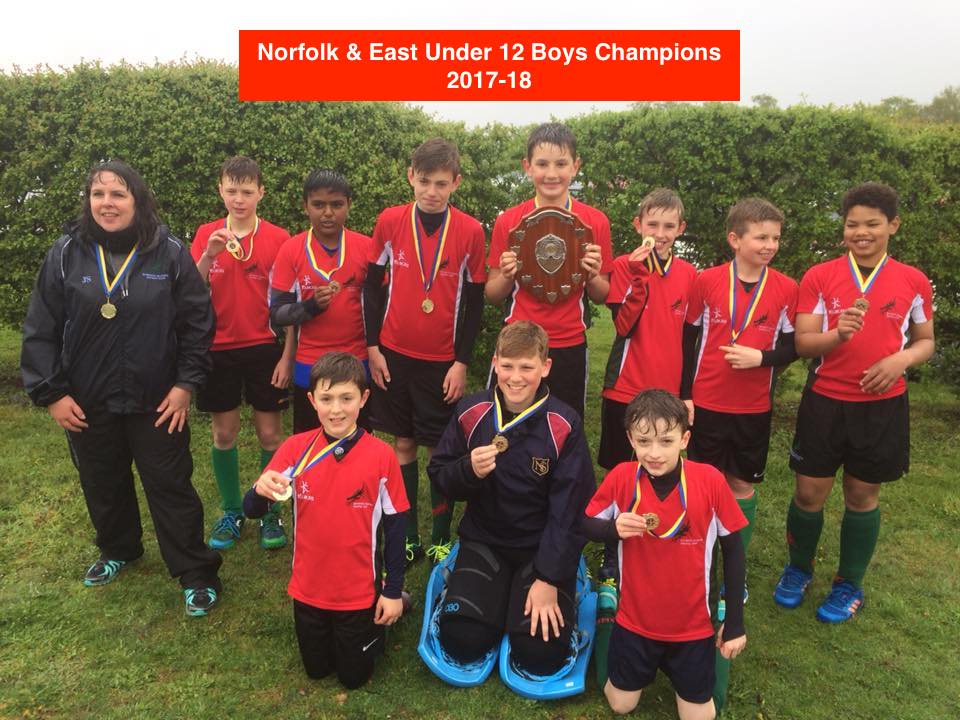 Having been crowned Norfolk Champions last month, the Norwich Dragons Under 12 Boys progressed to the East Championships this weekend, where the top two teams from Norfolk, Suffolk, Essex, Hertfordshire, Lincolnshire and Cambridgeshire challenged for the chance to progress to the National Finals.
Norwich Dragons played in Pool B and started with a 2-0 victory over Suffolk Champions Bury St Edmunds, another 2-0 win followed against St Albans.  The preparation the coaches have put the boys through was showing through in the damp conditions and in the next fixture Dragons scored 6 against Bourne Deeping without conceding. A 4-0 win over Saffron Walden then set up a final Group Match against the team expected to be challenging for the title, Old Loughts, the Essex Champions.  However, Dragons managed to keep a cleansheet and scored 2 to secure top spot in the Group.
A semi final against Blue Hornets of Essex saw the boys concede their first goal, however they came through 2-1 winners and secured a place in the National Finals and the final of the East Championship.
Group opponents Old Loughts had made it to the final and the two teams contested a tight final game, finishing 1-1 in normal time and so on to penalty flicks.
3 flicks were taken by both teams and the score was 2-2, so on to sudden death penalties, Old Loughts took their flick first and missed, Dragons slotted their flick away and took the East Champions title.  So off to the National Finals on Saturday 12th May.
As a Club we are extremely grateful to Manager Johanne Steward, Lead Coach Rich Smith and all other coaches and players that have helped to prepare the boys for the tournaments.  There is a great team spirit within this group and that shows in their performances on the pitch.
Well done boys!!
#proudtobeaDragon