Dragons travelled to newly promoted Ipswich and East Suffolk, hoping to bounce back from the disappointing defeat to Pelicans the week before. However, they found themselves 2 nil down in the first five minutes. Ipswich’s high press lead to a turn over from which they scored and then a second turn over from which they won a penalty corner: Wagstaff on the line was only able to parry the shot into to the net. Dragons struggled to find any fluency in the first half and conceded a 3rd goal making it 3-0 to Ipswich. Dragons finally managed to play to their potential in the final 15 minutes of the half and Sam Parmenter took 2 well taken goals making the half-time score 3-2 to Ipswich and East Suffolk.

Dragons continued to play well in the second half, enjoying much more of the possession and started to create a number of opportunities. The went close when Matt Knights’ pass didn’t quite complete to Snelling as they bore down on the goal keeper. Midway through the half the game was brought to a halt when Chris Simmonds was struck in the top lip by the ball. This resulted in a trip to A&E for him and some stitches; many thanks to the spectator who took him to hospital. This did not disrupt Dragons who continued to look for the equaliser. They managed to win a number of penalty corners, but were unable to beat the Ipswich keeper. By this time it was nearly all Dragons and Matt Knights went close, seeing his deflection just creep over the cross bar. Dragons then lost their captain, Danny Knights, having taken a penalty corner strike directly onto his foot as he ran out. As time began to run out Dragons were caught on the break, Ipswich tapping in at the far post to make the score 4-2 to Ipswich and East Suffolk. This left too much for Dragons to do, final score 4-2 to Ipswich.

The Dragons 2s cruised to their 3rd win of the season on their first outing at the Dragons’ Den. A game that was dominated from the off, with the home team playing positive attacking hockey, all in Felixstowe’s territory. Competing with the strict structure and precise passing from the Dragons was a tough task for the away team. It didn’t take long before the opposition’s goal was breached after persistent Dragon pressure. Dan Cheesman’s undercut throwing the keeper completely, to allow the ball to grace the inside of the goal and in the process nearly taking team-mate Piers Gordon-Brown out; if it wasn’t for a swift duck. This was shortly followed up by Mark Flatman slapping in a short corner breakdown at the top of the circle. Ricky Powley was making his presence known by firing several efforts at the goal making the Felixstowe keeper work hard to keep the score at 2-0 going into the interval.

Dragons started the second half as they had done the first, maintaining their positive attacking pressure and structure. The home side’s defence had slightly more to deal with in the half as Felixstowe tried to catch the Dragons on the break, only to be quelled by the inspiring unit at the back. Further attacking pressure lead to more opportunities upfront with Dan Cheesman squandering a couple of chances before slotting home from close range and then finishing off his hat trick with a coolly taken effort, giving the Dragons a 4-0 victory.

Man of the Match: Dan Cheesman.

Dragons Mens 3rd team started this match positively and soon had the young students on the back foot. The pressure soon resulted in the team being awarded a short corner which was capitalised on when Will Kirby’s effort from the top of the D arrowed into the bottom corner of the goal to give the Dragons a 1-0 lead. Attacks continued to be created and some good saves from the UEA keeper ensured his team remained in the match. Peter Davison was having a commanding performance at sweeper for the Dragons and also acting as a support for the Dragons midfield and would be duly rewarded after the match by being nominated as player of the match. The half ended 1-0 with UEA failing to trouble the Dragons keeper.

Early in the second half the Dragons increased their lead when a good cross from Will Kirby enabled George Walker to score a rare open play goal. This two goal cushion helped to ease any anxiety in the Dragons players minds. The Dragons continued to create chances and win short corners but continued good play by the UEA keeper ensured they could not score the goals that would have reflected the dominance of their performance.

A good performance playing at times in both defence and midfield was witnessed from Jon Goodson.

Bury St Edmunds 4s travelled to the Dragons’ Den with only 10 men, despite this they put up a valiant effort. The visitors scored 2 goals in quick succession with fast runs through the middle. Dragons pulled 2 back to reach the halfway stage all square.  Bury scored another early in the second half but with no subs they were eventually overcome by Dragons dogged persistence who finished stronger and finished the game 4-3 victors. Dragons scorers: Dave Thornton, Henry Laming, Paul Keating and Michael Whitmore with Henry Laming just pipping Rob Jenkins to the Player of the Match, thanks to his top of the corner reverse stick strike.

Photos from this match here

Dragons Ladies 1st team played host to IES on Saturday and romped to a convincing victory.

The home side started with a high tempo immediately testing the IES defence before Dragons Captain Marie JAMES opened the scoring with a diving effort diverting a cross beyond the keepers reach. The second was soon to follow; some excellent work by Laura SHREEVE allowed Shelly SEAMAN to open her account for the season. The Dragons got a third before half time this time SEAMAN the provider for SHREEVE to neatly slot home from close range.

Having leaked goals in the first two matches of the season and allowing teams back in the game the Dragons were determined to keep a clean sheet and to their credit the defensive back four maintained their discipline and controlled the game giving the team a strong platform to build their attacks.

The home side continued to push forward dominating the game and hungry for more goals. The youngest Dragon Lizzie CHEESMAN started the scoring in the second half smartly deflecting a cross which gave the keeper no chance. The fifth was as a result of a good run by CHEESMAN dribbling past the IES defence before sliding the ball through for SHREEVE who neatly slotted the ball past the keeper. After wave after wave of attacks player of the match CHEESMAN scored a second. SHREEVE full of confidence now was rewarded for her endless running by scoring another two goals and completing her hat- trick for the second consecutive week.

Dragons travelled to sunny Sheringham with a changed team, due to unavailability. After a slow start, not helped by a sloppy warm-up, Dragons gradually got into the game, forcing a number of short corners. Despite good efforts from Claire Baker and Sophie Cullens, Dragons couldn’t get past a Panthers GK on top form.

Panthers had a spell of pressure, but were thwarted by some solid defending, most notably from Sarah Wagstaff and Player of the Match, Maddie Denman. Panthers scored from a smartly taken short corner.

Not to be down hearted Dragons continued to battle, and finally beat the Panthers keeper following a broken down short corner, smartly tucked away by Claire Baker.

The second half saw Dragons continue to put pressure, with some good work by Klara Moolman and Niamh Lowe Davies, however they couldn’t turn this pressure into goals. Amy Forse was required to make a couple of smart clearances near the end of the game, to keep the score at 1-1. Plenty to build on for the Dragons.

Dragons came out strong from the start and scored within the opening five minutes. A powerful cross from the right by Caroline Wolfe was skillfully picked up by Pollyanna Watson, who placed the ball neatly in the net.

The second came soon after when a broken down penalty corner was pushed home by Wolfe.

Dragons continued their dominance in the second half, with further goals from Gregorie, Wolfe, and Watson, who completed her hat trick. This earned her player of the match. 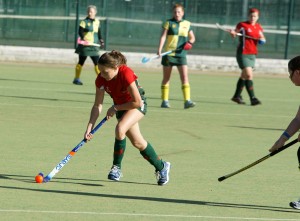 Norwich Dragons 4s looked to continue their 100% record and did so in emphatic style. Led well by captain Kate Atkins the Dragons dominated possession but were unable to break through the City defence until the dying seconds of the first half when Holly Francis deservedly put the Dragons ahead.

The second half saw Dragons continue the on slaught. Again credit to the City defense who were proving to be very strong.However after lots of possession and patience Dragons were rewarded when Lynne Price put the Dragons 2.0 up. A further 2 goals by Debbie Santa Clara and a cracking shot by Megan Harvey saw the Dragons end the match with a well deserved 4.0 victory and another clean sheet.

Player of the match Catherine Bourassa worked tirelessly as did the entire team. Great effort ladies.

Photos from this game here

Dragons enjoyed a comfortable win over a weakened Breckland side, who put their strongest outfield player in goal in order to keep the score to a respectable level. She performed heroics, and her fellow defenders bravely withstood a barrage of shots from the Dragons.

However, it was the young Dragons’ players who caught the eye, with Izzy Woodcock making her debut at senior level and opening the scoring. Marcy Windsor-Waite, a product of the Development League Team, was player of the match for some determined runs down the right. She scored an excellent goal by cutting into the circle and lifting the ball through a maze of players. Rosie Korn completed the scoring, picking a ball out of midfield and powering through.

Abi Cowe had an excellent game in the centre of the defence, and ensured Breckland only had occasional forays over the halfway line.  Emma and Katie Buxton have continued to improve their core skills and will not look back this season. Ciara Wilmott and Chiara Bond also look very comfortable at his level, and Beth Elgood and Lisa Harwood enjoyed their Dragons’ debut. Lois McGregor, Laura Goodbun and Bridget Le Good also showed sufficient form to make the point that even at 5s level, Dragons have a strong squad and competition for places this season will be strong. Regular attendance at training is essential; the senior players in particular must look to take responsibility for the fitness levels. The players also need to work on their ‘first touch’ and early decisions.