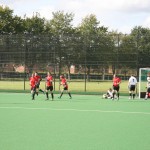 Dragons put in their poorest performance so far of the season, losing 3-1 away to Pelicans. Dragons had high hopes of building on their 7-0 win from the previous week but struggled to come to terms with the pitch and the pace of the game. Despite being on the back foot for the first 10 minutes of the game, Dragons were unlucky when their first penalty corner strike was deflected into the roof of the net by a defender, but was then disallowed by the umpire. Dragons continued to defend for much of the half, conceeding a number of corners. It was from one of these corners that Pelicans scored with a well taken drag flick, low to the keepers left. Pelicans scored their second from a broken down corner, the follow-up strike being deflected by the closing defender past the goalkeeper into the roof of the net. Half-time score 2-0 to Pelicans.

After a strong team talk at half-time Dragons picked up the pace of their game and started to pose more of a threat to the Pelicans defence as well as reducing their attacking opportunities. Dragons pulled a goal back when Garnett Jones’ forceful cross was deflected by a Pelicans defender into his own net (2-1 Pelicans). Dragons continued to push forward looking for the equaliser; the Pelicans keeper pulling off a fine save, deflecting Rupert Snelling’s drag flicked corner onto the post. Dragons were finally undone when a long pass from Pelicans into the Dragons’ defending circle was deflected by a defender into his own net.

Dragons man of the match was Robbie Whiting.

Norwich Dragons Men’s 2nd XI had a very strong first half, with swift passing and a disciplined structure.  The early pressure resulted in the opposition giving away a series of short corners, however the first goal came from Andy Kelsall who managed to find the back of the net with a first time shot from a crossed ball.  Dragons continued to surge forward with an attacking formation and were awarded a penalty flick late in the first half, duly converted by the experienced Ricky Powley.

The second half brought more of the same pressure from Dragons in Thetford’s half but to no avail needing Damien Ives to pull off some great saves when needed.  The visitors became frustrated that they couldn’t extend their lead and received two yellow cards for misdemeanours, however they managed to hold to their two goal lead to claim all three points.  Neil Shorten received his second consecutive player of the match award for a very solid performance at the back.

Dragons 3rd Team played their first match in Division 5NE after last season’s championship winning season. On a glorious Autumn Day against an under strength opposition the Dragons started slowly and couldn’t get their normal passing game working.

The Dragons were woken into life by a Magpies short corner which hit the outside of the post and bounced safely behind. The breakthrough finally came when the ball was moved out of defence and switched to the right before the ball was crossed into the D for Matt Jenkins to score his first goal for the team from close range.The half finished with Dragons leading 1-0.

A half-time team talk stressed the importance of composure and calmness. This was swiftly put into practise with the ball being played to the flanks and taken to the baseline before being cut back for the forwards to have time to shoot. Goals were scored by John Ives with a bouncing shot and by Will Kirby and a double from Adrian Kemp. The Dragons defence was untroubled in the second half dealing well with any danger.

A good performance by young Will Ives on both wings using his pace to good effect deservedly earned him the player of the match award.

Photos of the Game

Nomads started the game with 10 players and Dragons dictated the pace with some good passing, building up to attacks on goal. However, Nomads tried to turn this around with some fast passing and runs at Dragons defence which led Dragons to lose their shape.
Nomads went down to 9 in the second half after one of their players received a yellow card for dissent and decided not to return! Nomad’s heads went down and there followed many attacks on their goal resulting in goals from Dave Thornton (x2), Andy Key, Chris Harrison, Michael Whitmore and Rob Jenkins.
The goal tally should probably have been much higher but Dragons lacked the fire in their bellies and accuracy in shooting. Still Dragons passing game was superior to the opposition and they enjoyed the majority of possession. Rob Jenkins was particularly strong in midfield.  Ben Campbell was Dragons’ man of the match. He was excellent down the right-hand side beating defenders with pace and creating numerous chances.

Dragons 1st team started the game at a very high pace, passing the ball around effortlessly forcing an early goal through 1st Team Player of the Match Laura Sheeve. Whilst the 2s worked extremely hard, particularly in defence, Dragons 1s were clinical, with a goal set up by Gail Thomas, finished coolly by Natalie Beal, and another from Laura Shreeve, to make it 3-0 at halftime.

Dragons 2s started the 2nd half extremely positively, playing some great hockey and putting the 1s under pressure. Excellent work from Ally Windsor-Waite on the right, Sarah Wagstaff and Alice Guest in the centre of defence, and some tireless running from 2nd team debutant Klara Moolman, saw the 2s force a couple of short corners, which were both well dispatched by Saskia Delacave, to bring the game back to 3-2.

At this point the game could have gone either way, with Dragons 2s continuing to pressure the 1s defence.  Eventually, the 1st team sealed the game, with Laura Shreeve completing her hat trick with a smart finish, to conclude the scoring at 4-2.
Both teams should take credit from the way they played the game.

Despite the Dragons dominating the play, the score at half time was 0:0 due to Broadland’s solid defence and sharp goal keeping.

The second half saw the homeside change tactics and instead of trying to drive through the Broadland defence, they played more of a possession game.  After several penalty corners, the stalemate was finally broken by Amy Brown converting one from a pass slipped left to her.  This boosted Dragon’s confidence and a second penalty corner saw Caroline Wolfe and Amelia Dawson play a one two move at the top of the ‘D’ with Wolfe putting the ball in the back of the net.

The next Dragon’s goal came from open play, with Isi Christophers sweeping a ball into the ‘D’ for Amy Brown to add her name to the scoresheet a second time.  The final goal came from a Caroline Wolfe straight strike from another penalty corner.

Dragons’ player of the match was Amy Brown, who not only scored two key goals but also showed good movement on and off the ball and supporting team play.

What a great start to the season for the Dragons 4s, though it felt a bit strange playing against fellow Dragons, with a 5th team being established this year.

While being a new team, the Dragon’s 5s certainly made a strong start, keeping the 4s on their toes. After the first ten minutes the 4s settled down and began to make some lovely passes and the goals soon began to appear. Lynne Price kept the team working together and also scored the first goal. This was soon followed by Lucy Campbell making a fantastic sweep in the D which slipped past the goalies feet.

Dragons 5s had some good breaks in the play with some excellent runs down the left side which resulted in 2 short corners; their player of the match was Jihanna Bonilla-Allard, who fought furiously for every ball on her debut.  There were excellent saves by both keepers, notably Sue Cullum who saved a lifted ball and the score at half time was 3:0.

The second half saw a cracking goal from a short corner by Sue Cross, Catherine Bourassa continued to be strong on the right, driving the ball, before making some excellent crosses into the D which were received by new member Scarlett Brown (4s player of the match) who is definitely a most welcome asset to the team, scoring 3 of our goals. Although she did not see much action Karolina Blažytė made some excellent saves in goal to keep the oppositions score down. Overall the Dragons worked well as a team and are looking forward to the rest of the season.

Dragons started the game well with Aoife Lowe-Davies moving the ball quickly up the pitch and they soon had the game under control. Not long after, Harriet Bracey took the ball up the pitch and hit it into the goal. The game stayed pretty even for the rest of that half. Only letting the ball slip a couple of times. Half time score 1-0 Dragons.

During the second half Dragons still had control but Watton got through and scored with about 5 minutes left of playing time.

Jess Tye Leech did a great job helping the team by playing in goal and the 1st Team Ladies Team players of Emily Rolls and Marie James were great with the girls, who learnt a lot from them.

The game ended with a 1-1 draw, but was played in a great atmosphere and in the spirit of how the development league should be played, so well done to both teams.

Player of the Match was Aoife Lowe-Davies.

3 Memorable Moments – Henry Laming’s goal, lots of possession in the opposition half and big improvement on last season.