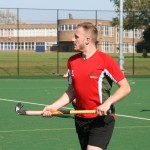 With a new lineup for this season, Dragons started slowly in their opening league game. UEA enjoyed the majority of possession in the opening minutes of the game, but were unable to create any chances to trouble the Dragons keeper. After the opening 10 minutes Dragons started to play their way into the game, enjoying more of the ball. Robert Wagstaff opened the scoring with a dipping penalty corner strike (1-0 Dragons). This seemed to settle Dragons who established their passing game, creating a number of chances in front of goal and pressing the UEA defence. However, Dragons still needed a good save from Jim Woodruff to keep the score at 1-0. Steve Woodward made it 2-0 to Dragons, sweeping in a pass from the marauding Ali Smyth. Smyth continued to enjoy attacking into the space afforded him and made it 3-0, finishing from close in on goal. Following in on Sam Parmenter’s fierce strike, Rupert Snelling made the score 4-0. Garnett Jones finished the half off for Dragons, smashing the ball into the back of the net from the top of the circle. Half -time score 5-0 Dragons.

In the second half Dragons surged forward looking for more goals. Though they were able to contain the UEA attacks, they were unable to play with the same fluency of the first half. Rupert Snelling scored his second goal following up from Matt Knight’s shot which had hit the post (6-0 Dragons). Matt Knights finally got just reward for his tireless work, scoring at the far post.

Dragons Ladies 1st team visited Broadland for their opening game of the season.

The home side started the better of the two teams threatening the Dragons goalmouth before the visitors had time to settle. As the Dragons grew into the game it was them who took the early lead by some good work by the Dragons youngest player Lizzie CHEESEMAN which led to the first short corner of the game being awarded. Player of the match, Shelly SEAMAN, slipped the ball through to Marie JAMES who placed it in the corner beyond the goalkeepers reach.

As the Dragons pushed forward looking for a second goal Broadland worked hard to win possession and on the counter attack levelled the match from some neat hockey. The Dragons retaliated immediately regaining the lead; Laura SHREEVE playing an accurate through ball to Marie JAMES who struck the ball from the top of the circle into the left hand corner of the goal. As the half wore on Dragons began to dominate and scored a third through Debs SMITH striking the ball sweetly from the top of the circle past the Broadland keeper. It was Broadland who retaliated on this occasion pulling a goal back and reducing the deficit to 2-3.

The second half was evenly contested but proved goalless. Broadland worked tirelessly to get something from the game. There was some entertaining end to end hockey for the neutral supports with both teams having opportunities to score but it was the visitors who managed to hold on taking all three points.

A newly formed Norwich Dragons 2’s saw much of the possession in this Div 2NE league opener, but lacked the ‘killer instinct’ in the final quarter.

Dragons went a goal down early, to a deflected short corner strike. Player of the Match Maddie Denman, gave a typically tenacious performance at left defender, despite strong Yarmouth pressure. Before the break, Yarmouth scored a second, however Dragons kept battling through Ruth Wilmott and Lucy Hopgood, linking up well in midfield.

The 2nd half saw Dragons concede a sloppy goal early on, but to their credit, Dragons kept trying to play the right way with Ally Windsor-Waite and Laura Bailey playing some good hockey on the right. A fourth for Yarmouth, a penalty flick almost saved by Freddie Briscoe, saw Yarmouth secure 3 points.

Dragons need to continue to work hard and play their quicker passing hockey game; their rewards will come.

Dragons started the game very strongly, with good runs down the wings and through the middle with some excellent breaks into the D.

The Home Team kept applying the pressure to the Dereham defence which eventually paid off.  Henry Laming fired a cross in from outside the D, which was deflected into the goal from a Dereham stick.  Under the new ‘own goal’ rule that put Dragons 1-0 up.

Dragons were soon two goals to the good thanks to a Mike Banham short corner, which was slotted past the keeper from a rebound to put Dragons 2 goals ahead.

As expected, the second half was a bit tougher with Dereham mounting solid attacks that led to a penalty flick being powerfully converted, giving Chris Millar no chance.

Dragons did not let their heads drop and had continued to build up play from the defence working through midfield to take control of the game.  Following a good passage of play, the high speed Dave Thornton showed he also has the skill to deceive the keeper and popped the ball in the net to make it 3-1 to the home side.

Dereham managed to convert a short corner to make the final score 3 -2.

Dragons Hoof Intra Club League
As decided at the AGM this season will see us running an intra club competition/fun regardless of the level each team plays at and also an additional incentive on Saturday over and above the actual fixture.

Since the Hoof includes friendlies as well as leagues, results from Saturday 8th September have already been taken into account. The only information that we do not have is if players are carded so we will need to rely on captains passing on this information. Hopefully cards will be an exception…ahem!

It is run as a league table for all the teams in the club (including the dev teams). Points are awarded as follows:

The league table positions are based on a team’s game average (e.g. total number of points / number of games)
Games included are friendlies and league games played between Saturday 8th September 2012 and the Awards Night.
Games not included are tournaments or those outside of the allotted season or those conceded by either team.
It was also decided to take into account Green (-1) Yellow (-5) and Red (-10) cards by deducting points