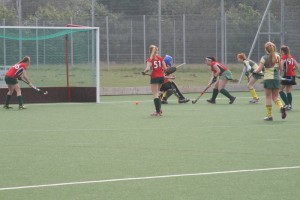 This season’s final game was won
By Dragons’ thirds at Taverham
Dawson’s squad came out to prove
That with the ball they all could move:
Such style and flair, they each did run
On a taxing pitch in springtime sun.
Tenacious spirit and determined play
From end to end on this derby day.
Play switched nicely around the back
With chances galore when City were slack.
A flick was won from a foot on the line;
Laura Tompson-Wright stepped up this time.
It wasn’t to be – she hit the post,
And then for a while we seemed to coast.

Then back on form with running at speed
Laura G and Marcy taking heed
Of Amelia’s rousing half time speech,
They frustrated City with their awesome reach.
Tash Falzon was our POM today
With tackles calmly on display.
Fluid technique and triangular passing
Tenacious energy, goals for the asking.
At last our chance with two to go:
Goodbun Racing – she’s not slow;
Passed to Wolfe at the top of the D
Around the defender, Farrow’s free;
Slipped to Sophie, and with her skill
She scored the goal – we won ONE-NIL!

Some photos from the game here.

Player of the match: Lara was player of match because she ran up and down the pitch quite a lot, and had a couple of close shots.