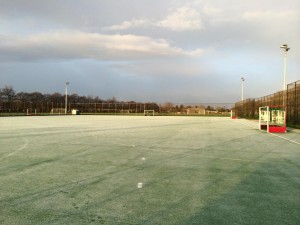 Most games across Norfolk were postponed or abandoned this weekend.

After many local games being called off due to freezing temperatures, Norwich Dragons set off for London in the snow, knowing that the temperatures were warmer and the sun was shining. Dragons arrived for their first game after the Christmas break in good time and were able to warm up thoroughly. The previous meeting saw the London side win 3-0 so the Dragons knew it was going to be tough encounter but were up for the challenge.Dragons welcomed Ruth Willmott, Lucy Hopgood and Karen O’Neill Simpson to the squad, knowing that it was going to be squad effort that would enable them to get anything from the game.

As expected Bromley and Beckenham started strongly. Their experienced and well drilled high forward line kept the Dragon’s defence of Ruth Willmott, Maddie Denman, Donna Vaughn and Lizzie Moulton busy, not allowing any of the dragon’s players any time on the ball. The visitors stood strong and player of the match, goal keeper Siobhan Cleeve, was in outstanding form and keep the home side out and increasingly frustrated. The unrelentless pressure continued throughout the half until just before the half time whistle when the deadlock was broken.

Dragons were determined not to be downbeat and set off in the second half to try and get a goal back. Tireless running by forwards Emma Tabrett and Hayley Toleman tried to stop Bromley and Beckenham playing their usual game. Midfielders Sophie Mullan and Sarah Richards, with Niamh Lowe Davis and Olivia Thomas on either wing, started to apply some pressure on the home sides defence but were unable to create any clear cut chances. Later in the second half, the home side were able to execute a short corner to double their lead. Still the Dragons pushed on and tried to get something from the game but the final whistle halted any scoring chances, meaning the home side won 2-0.

The Dragon’s team although disappointed, can certainly hold their heads up high. They were disciplined and worked extremely hard against the former National League side. They will have to carry on this on next week against another strong opposition, Old Loughtonians to try and add to their points tally for the season.

One of the few games to take place this weekend saw Dragons 4s travelling to the still rather chilly, but sunny Watton.

Dragons had a strong first 15 minutes, with initial runs from Kate McKenna and Mel Widdows getting the ball to the oppositions D, solid defending from Watton saw play well manoeuvred out of danger and the game was quickly turned in Watton’s favour. Solid work in midfield from Gemma Rump and Katie Buxton saw most attacks stopped before they started and in combination with great work on the right from Louise Davis and on the left from Abi Cowe Dragons looked strong. However Watton have the ability to change play quickly and with a couple of really strong hitters at the back and well positioned forwards remaining high and wide they managed to find and create space that lead to them scoring first.

Dragons seemed to lose a little bit of composure and drive at this point and while play remained fairly even between the two teams, the ball didn’t really make it out of midfield although Chelsea Crawford and Freya Clogan did some lovely drives down the wings but couldn’t quite get the ball to the D. At this point in the game the sun was at such an angle that working out who was who was rather challenging – communication was vital and often the only reason a ball made it to another Dragon’s player!

After half time Dragons returned to the pitch with fire in their bellies, a few position changes saw Holly Bailey at the top of the diamond and this added real strength and depth to the game with some lovely team work from her and Sarah Moore on the right. The ball made it to the D more frequently and Watton were caught out on several occasions leading to short corners. This is where Dragons scored – a lovely strike from Amelia Dawson (PoM) into the left corner.

Dragons then went on the attack straight away, but Watton weren’t going to make it easy. Sue Cross battled on the left to take control and worked well feeding the ball back into the D and the ever present Amelia, who seemed to be all over the place. But Watton packed their D, leaving precious little space to get a clean shot on goal. Powerful hitting from the opposition continued to see play turned over, but again solid defending from the back line and Laura Tuck in goal saw off all attempts.

In the last 10 minutes Dragons had complete control with practically every player having a go at getting the ball into the goal, Gemma Rump and Katie Buxton both had some lovely attempts from the top of the D and Kate Mckenna came close driving in from the left. A final short corner came the closest with Amelia missing the goal by an inch. The game ended 1:1 and although we were disappointed not to have edged ahead, the second half showed a much stronger and determined team – a good sign for next week.

Given an unenviable Sunday trip to Ipswich, Dragons were looking to continue their excellent form of 2014.  This wasn’t to be however, as they suffered their first defeat of the season, going down 4-1.

The Sunday fixture allowed Ipswich to field a strong team and they started the game strongly, scoring early and having most of the play in the first half.  Dragons were rusty given the length of time since their previous game on the 6th of December and this was a factor as Ipswich continued to dominate and built a 4-0 lead by half time.

Giles Brooks made a number of good saves, whilst Dave Pentin was vocal in trying to organise the defence which was caused some problems by the pace of the young Ipswich players.

The half time analysis focussed on avoiding diving into tackles (as covered in training last week!) and having a bit more composure on the ball.

Dragons enjoyed a much better second half as Ipswich failed to maintain the same intensity and whilst a Dragons comeback was a long shot, they improved enough to ‘win’ the second half 1-0, Robbie Whiting maintaining his impressive scoring record this season.

Rich Moulson and Man of the Match Jason Wolfe were impressive in midfield, using experience and skill over the youth and pace of the opposition, whilst the whole Dragons squad showed a great attitude to keep working despite the early goals.

Overall, a deserved victory to Ipswich which cuts Dragons’ lead in the league to just 4 points.  A tough game against second in the league IES 4 next week will see Dragons looking to get back to winning ways.