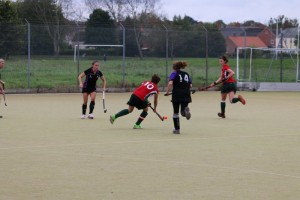 A repeat of last season’s opening round of the Knockout Trophy, Norwich Dragons Masters Ladies over 35s took on Pelicans, although this season saw an away rather than home fixture.  Dragons took a little while to find their rhythm and it was Ally Windsor-Waite that opened the scoring from right midfield. Determined to improve on last season’s 3-0 win, Captain Marie James pushed the team on and alongside late call up Lizzie Moulton in the middle of the pitch, Dragons were dominating possession.

The second goal took a little while to arrive, however further goals from Caroline Wolfe x2, Marie James, Laura Shreeve, Hannah Hardy and Lizzie Moulton, saw the visitors finish with a 7-0 victory.

Guest keeper Kate Bond was superb in goal when called upon, although an unexpected sideline back pass did catch Kate and Rowie chatting, resulting in a hasty retreat by keeper and defence to protect their cleansheet!

A great team performance from all members of the squad.

Dragons went into this match with a strong squad which included goalkeeper Alex Wolfe stepping up from the Under 12s. The early pressure was from IES who managed to convert a good chance to take a 1-0 lead. Shortly after Jose San Millan scored an equaliser for the Dragons. Jonathan Chaney Baxter cooly slotted the ball home for the Dragons to take the lead before his strike partner Joe Beadman added to the tally to put the Dragons 3-1 ahead. The first half was dampened by Jose having to be taken to A&E with a split eye lid meaning Dragons had to finish the game with only eleven players.

IES kept the pressure on Dragons and scored to bring the game back to 3-2. Dragons reopened a two goal cushion after Raunaq Singh Rai scored after a mazey run from the top of the ‘D’ follow a short corner. As Dragons tired they had to work hard to limited IES chance but were stuck in their defensive half. IES pulled one back but the Dragons’ defence of Harry, Blue, Edward and William held firm as Dragons came away with all three points. Raunaq was voted man of the match by his teammates.

Dragons went down 2-1 to a good Bury outfit but with only 11 men Dragons put in a performance to be proud of.  Superb passing hockey and solid defending was topped off with a top right drag flick goal from player of the match Henry Laming.  Many thanks to David Pentin for travelling as a late call up umpire.