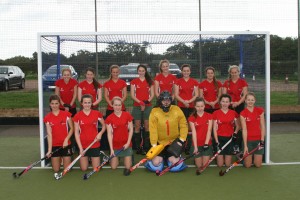 The Under 16 Girls kicked off Norwich Dragons Hockey Club’s foray into the excitement that is the England Hockey 2013/14 Championships with a 10.30am pushback away to Harleston Magpies.

With 6 of the squad fresh from their Norwich High School for Girls team victory in the GDST Under 18 Championships, and all players in good form for the Club in their various adult teams, confidence was high although no complacency was to be found against Harleston Magpies.

Captain Ruth Willmott ensured all players were fully warmed up and tuned in to the task ahead, with the coaching team of Pete Thomas and Bridget Le Good ready to direct proceedings from the dugout.

With the umpire’s whistle to start the match, the Norwich Dragons girls signalled their intent by pressing forward with a string of excellent passing moves through the midfield, with Olivia Thomas, Emma Moolman, Polly Watson and Niamh Lowe-Davies all showing extreme maturity in their play and the kind of sharp passing that would be the envy of any of the Dragon’s adult teams.

A strong squad of 15 players ensured that regular rotation of the forward line kept the legs fresh and the pressure on the home side, whilst consistency in the defensive line up ensured that any Magpies attack was snuffed out by Player of the Match Laura Bruce, Maddie Denman and Sophie Thomas.  Ruth Willmott had a superb game in front of the defence intercepting the majority of the home side’s attempts to drive through the middle of the pitch, whilst also contributing to Dragons’ attacking moves.  Thanks to the strong defensive unit, goalkeeper Alice Smith had little to do in the first half, however when called on throughout the game, Alice showed great concentration with a number of no nonsense clearances.

A quick and strong forward line of Sophie Cullens, Laura Goodbun, Marcy Windsor-Waite, Anja Finegan, Amy Brown and Aoife Lowe-Davies caused lots of problems for the Harleston defence in and around the D.

The first goal for Dragons came as a result of a succession of short corners, the last of which was not cleared by the defence and a swift pass across to Emma Moolman on the far post saw Emma calmly slot the ball away.

A number of strong moves down the right saw the visitors create further chances, the second and third goals came as a result of great composure from Olivia Thomas who skilfully drove thorugh and round the back of a number of defenders to pull the ball back to the penalty spot, finding the youngest player in the squad Aoife Lowe-Davies for the team’s second and then a carbon copy move for Amy Brown to slam passed the keeper for the third.

A half-time lead of 3 goals to nil was fully deserved.

Again a great deal of maturity was shown by the girls in the second half, whilst they maintained the pressure on the Magpies defence, they did not over-commit and risk conceding a goal, when called on the defence and keeper were rock solid.

Despite lots of action in and around the Magpies’ D, the visitors found it hard to break through the home defence.  Eventually the fourth goal came as a result of a short corner slipped by Amy Brown to Olivia Thomas who was in behind the one and two runners, so had time to compose herself for the shot.

An excellent team performance from all 15 squad members who look forward to their next fixture against Ipswich at the Den on 10th November. 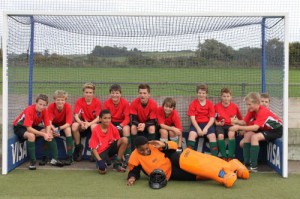 Also playing at Harleston, the Under 14 Boys had two fixtures to navigate, against Phoenix (Essex) Blue Hornets and Harleston Magpies.

Having beaten Harleston Magpies 2-1 in the opening match of the day, it was clear that the Blue Hornets had a sting in their tails.  So Dragons were delighted that their first match (against Hornets) was very even, with some great attacking moves from Edward Murphy and Rob Chaney Baxter which led to some great opportunities to score but the visitors just struggled to get the ball in the back of the net on enough occasions. Rob C B did nick a goal with some excellent work from Pedro Goss, to ensure the score was even at 1-1 at half-time.

The Dragons defence worked very well together and were well led by some excellent tackling from Andy Carver and Harry Cullens, unfortunately Hornets scored two further well-worked goals resulting in a 3-1 loss.

Not allowing themselves to be dis-heartened, Dragons then faced Magpies in the second game.  The Dragons resolve was tested when they went behind early but everybody worked really hard going forward and tracking back.  This helped the Dragons to win the battle for the middle of the park, following which they were able to drive into the opposition’s “D” and let off a fierce shot for the equaliser.

Dragons then continued this pressure and another well-worked goal between Edward, Rob and Pedro was reward for the hard work of the team. Alas, with 5 minutes to go, Magpies managed to score an equaliser giving a final score of 2-2, which is a very positive result against a team with some very strong players.

Well done to the team for working so hard for each other.

Sunday saw Dragons travel to face league rivals Spalding, who lead division 2N, in the first round of the England Hockey Vase.

Dragons squad of 12 was a much changed side from the previous days match, with first team debuts handed to Matt Collinge, Paul Bullard and Ollie King.

Dragons set up to contain Spalding’s skillful and fast attack, and work their way into the game.

With a large home crowd behind them, Spalding came out of the blocks strongly, winning a series of penalty corners during the first few minutes that Dragons did well to defend without conceding.

Eventually, however, this early pressure told with Spalding taking the lead before 10 minutes were up.

Dragons did find their way more into the match, but were unable to make any serious inroads into Spalding’s defensive circle, despite a period of pressure towards the end of the half. Spalding then increased their lead before half-time after turning Dragons over high up the pitch and breaking at speed with a slick passing move, ended with a fine reverse stick strike into the the corner.

This re-energised Spalding who poured forward for the remainder of the half, and Dragons were indebted to some outstanding saves from Matt Collinge, including one from point blank range with his helmet.

After a good half-time team talk and some tactical adjustments, Dragons came out much stronger after the break, pressing their opposition much harder and denying them space and time to get back into their rythmn.

This pressured resulted in Dragons best period of the match, with Spalding struggling to clear the ball and Dragons winning a couple of penalty corners of their own. Despite both corners being well executed, Dragons were denied a way back into the match by good goalkeeping and an excellent defensive block.

As the half wore on, Dragons began to tire, and Spalding made tactical changes of their own, combined with effective use of their large squad, to regain the momentum. Despite this, Dragons continued to defend stoutly, with the defensive line of Piers Gordon-Brown, Rich Smith, Ali Smyth, Barney Price and Paul Bullard, giving everything, and when they were breached, Matt Collinge continued to produce an outstanding performance to frustrate Spalding further.

Even a penalty stroke awarded against Collinge could not increase the deficit as he produced a fine save with his legs to deny the Spalding forward.

Eventually, however, Spalding’s pressure did tell with two further goals added in quick succession to remove any remaining doubt as to the outcome of the tie.

A tough game for Dragons against a well organised and skillful side that deserved the win. Dragons will now refocus their attention on the league, and wish Spalding good luck in the next round.